I have not viewed all the videos nor the required and optional readings on Module 4 for Governance, but since I had some brain nudges on the subject of NAGPRA and other issues regarding ethics, filming native peoples along with law I couldn’t help but interject before I watch and read the rest.  However, due to download speeds that caused incessant buffering delays I was not able to view the 25 minute video which Lenny Kamerling posted that he and Sarah Elder made of the backstory behind Drums of Winter to show their methodology and perspective on new ways to collaborate with the native people they film, .  But I had seen this and other films they shot for a summer semester grad offering that Sarah gave at UAF as part of a class titled Visual Anthropology cross listed in the Journalism department for documentaries.  Another set of films Sarah showed in class are clssics including Nanook of the the North and Leni Riefenstahl’s 1935 propaganda film of Hitler, Triumph of the Will.

Later when attending the Museums Alaska conference in Seward 30 years later, Lenny presented a remastered video made of that same film that was accomplished with a major humanities grant to scan frame by frame the 16 mm movie master for archival purposes and reissuance.  Seeing it again made me appreciate their technique which was cutting edge for changing attitudes toward how you do documentary films back in the 1980’s.  Also in that vein take a look at another UAF professor, Steve Smith who ran the film department classes and taught the old fashioned ways of 16 mm photography.  He put together a long documentary for KUAC TV series titled Make Prayers to the Raven about Koyukon Athabascan peoples of the Alaska interior.  It took Steve a long time to make his epic over several years and folks at KUAC joked he should have retitled it Make Prayers to Forever  because of the time it took to shoot and edit the multipart series. Very interesting perspective compared to the old documentary films of the 1920′ to 1960’s made by such 1930 travel wonks like Lowell Thomas.   Question to Erin and other students: HAVE YOU SEEN ANY OF THESE by Lenny Kamerling or Steve Smith?

NAGPRA:  as I remarked in the first module about the history of museums I recalled my first visit to the UAF museum that was first located in the third floor of the Eielson building on campus, I remember the display of Eskimo skulls in one collection.    Being a teenager in the 1960’s visiting it for the first time (probably before it was officially designated the UAMN and moved into Signers Hall next door) I had very little distinction of the differences between Alaska’s indigenous peoples other than Indians versus Eskimos.  One thing I recall was a description near the skulls that indicated why the teeth were so worn citing that the women and some men wore down their dentition by chewing hides to make them soft.  Watching the videos about NAGPRA and other policies that now allow indigenous people to petition for getting skeletal and religious or ceremonial objects returned, I harkened back to the ancient museum on campus I visited.

So the question of me to both the class and instructors is, What happened to those skulls that I saw in the UAF museum 60 years ago?

KENNICK MAN:  some time ago there was a spirited battle over the skull of Kennewick man that was discovered in Washington state in 1996. 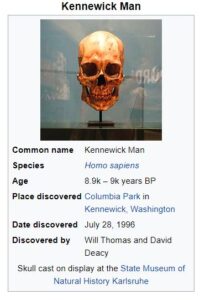 One Thought to “Module 4 ethics and law”