When I was in high school, I got into record collecting. This hobby was perfect for me as I both love music and the excitement of finding something extraordinary in an unassuming place. My Grandfather was a radio host in Fairbanks for the longest time on KFAR. The station had a massive treasure trove of vinyl records used for the many years of broadcasting that were less than meticulously cared for. One story I had been told was that one of my Grandfather’s coworkers at the station had a tiny Pomeranian puppy they would bring into the studio. During one broadcast, the dog leaped from the disc jockey’s lap onto the turntable that was broadcasting, and the subsequent rush to get something back on air would become a favorite anecdote of the other workers at the station.

When the vinyl record started going the way of the dinosaur, my Grandfather purchased many of them and kept them for personal use. He held onto these records for many years. A few years after he passed, my grandmother learned I had become interested in record collecting. I was told that I could have my pick of the enormous collection. As a vast music dork, I was more than happy to accept the gracious offer and retrieve what would be a wonderful reminder of my Grandfather and the music he loved. Many of the albums contain handwritten notes on songs, how they fared on the air, as well as lots of confusing notes that I am sure only he would know what they meant.

I quickly learned the proper storage and care methods for records that have lived far longer than they ought to. Many of these records are being at that point anywhere from thirty to fifty years old. Vinyl records are an impermanent way to store music. If not correctly cared for, the groves that produce sound can wear away, resulting in losing their ability to play. Unfortunately, this is inevitable, but through the use of isopropyl alcohol solution, the rate of decay can be slowed drastically. Keeping records at the proper temperature can also reduce the rate of decay. If stored in a place that is too hot, the records can become soft. This can warp the grooves or bend the record itself. If the records are stored in a too cold location, they can become brittle and can stay that way long after they have been brought to a warmer environment.

Another portion of record preservation is the treatment of the jackets. The incredible thing about the records I had the great fortune to inherit mostly had excellent quality jackets. Most are made of very cheap cardboard or paper and, much like the recordings themselves, are not meant to be permanent. Humidity is the main factor of deterioration, but covers can also gain a ring in the shape of the record within, often caused by leaning your records at too steep of an angle. Some records come with specialized jackets, often used as a gimmick to catch potential shoppers’ eye. One of my favorites collected albums is a first run pressing of Fleetwood Mac’s Rumors. This jacket is noteworthy because, in the first few runs of the album, the jacket was made of a plastic leather-like material that adds an elegant shine to the famous photograph of Mick Fleetwood and Stevie Nicks. This cover, since it is made of plastic leather, the jacket is already more resilient than most other jackets. 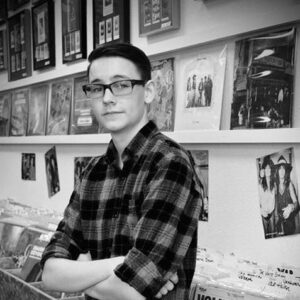 I had become such a dedicated collector that I had my high school senior photos taken at the only record shop in Anchorage. Its kind of silly when I think about it now but I was later Interviewed by the publication Vinyl Me Please about my decision to do so for an article characterizing Obsession Records as the best record shop in the state.

Have you ever had to partake in some kind of preservation yourself?