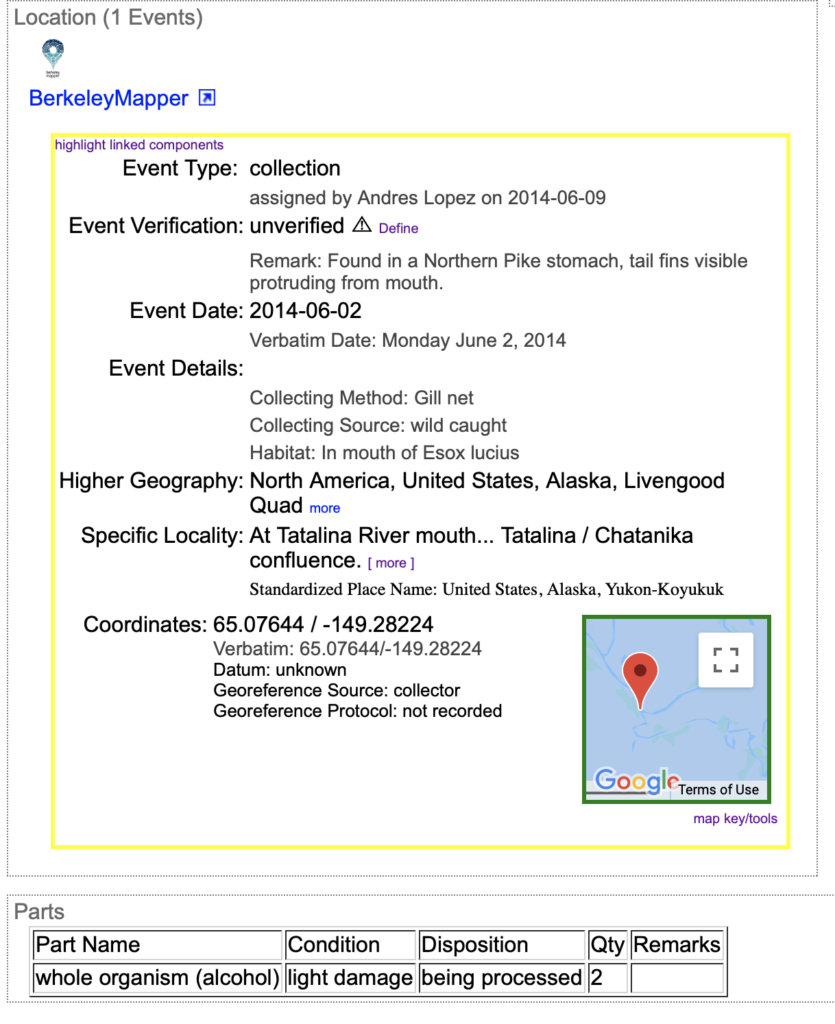 I thought it might be fun/interesting to look up a specimen of my research species, which is Arctic Lamprey, Lethenteron camtschaticum. I decided to search Arctos, the UAMN online database and select one mostly at random but with a recent-ish collection date. The specimen that I ended up choosing had the following accession number associated with it: UAM:Fish:3767. This specimen was collected on 06/02/2014 at the mouth of the Tatalina River (the confluence of the Tatalina and Chatanika Rivers) in Alaska, Lat/Long: 65.07644 / -149.28224. The whole organism was entered into the collection and preserved in an alcohol solution. It was collected by Andrew Gryska of the Alaska Department of Fish and Game and identified by Dr. Andrés López on 06/09/2014 due to its features. Its condition was listed as “light damage”. This is probably due to the fact that in the remarks it states that the specimen was found in a Northern Pike stomach with its tail fins protruding from the mouth (!!!). It was collected with a gill net, the collection source is listed as wild caught, and (this is hilarious) its habitat is listed as “in mouth of Esox lucius” which is the scientific name of the Northern Pike. So, it seems like the Northern Pike was caught in a gill net and the lamprey’s tail fins were seen coming out of its mouth as it was trying to eat it. I suppose the lamprey was then removed from the pike, preserved in alcohol, and entered into the collection. This whole situation is interesting to me because something similar happened to me when I was working in Washington where we were seining and collected (and released) a large chinook salmon that had likely been released from a local fishery, but it had a tiny wild coho salmon (I think it was) sticking out of its mouth. I tried so hard to find the photo, but I failed. 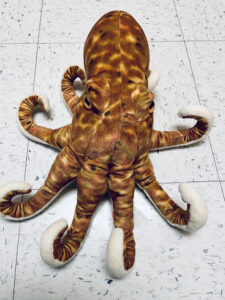 As for my home-found object, I decided to archive a stuffed octopus that we have for some reason. Except because my example from Arctos was a preserved, but once living specimen I decided to archive this stuffed octopus as if it was a real octopus that washed up on the beach. I also decided to identify the octopus as a Giant Pacific Octopus (Enteroctopus dofleini) since 1) it kind of looks like one and 2) I obtained this stuffed octopus from (you guessed it) the Royal BC Museum in Victoria, B.C. and GPO are known to be present in B.C. I have also decided to use a similar format to Arctos as if I was archiving the specimen in the UAMN collections. The elements I have assigned the specimen can be found in the table below.