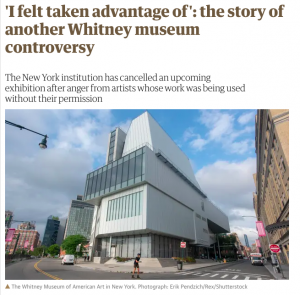 This was a hard week for me to get through. There are so many controversies and questions about ethics, rights, and responsibilities of Museums, seeing them laid out at once always makes me feel so angry and makes me wonder if I even want to participate in these systems and institutions at all. Of course there are museums that handle controversy gracefully and deserve credit, but arguments over ownership and conservation always get me heated.

I appreciate that there was a fairly large focus on Nazi looted art in this module. The scale of all the atrocities of WWII deserve all the attention they get and then some, but I left feeling like a huge part of historic looting was left out of the conversation of this topic. The amount of cultural objects destroyed and stolen from the colonization of South and Central America and across Africa was fairly horrific as well from an arts and culture standpoint. The articles on the British Museum touched on this, but the biggest museum that holds collections like these in my mind in the Louve in Paris. While this looking was slower and more meticulous and without the horrific tragedy of mass death, it was still looting and should always be treated that way. I could talk about the Louve’s and other’s misrepresentation of these objects, their refusal to return the objects to their homelands, and how they contribute to colonial attitudes that are still present around the world. I could also talk about how targeted destruction of objects contributes to suprematist attitudes, like the washing away of paint off greek and roman statures so they appear white as opposed to the darker olive tones they were likely painted when they were created, the inclusion of mummies and deceased pharos as objects for display as opposed to graved robbed bodies.  There is just such a vast number of these controversies around ownership, representation, and responsibility that at times if feel like the institutions as a whole never manage to live up to their potential or even expectations.

The one I want to talk about to answer the prompt is one along these same lines and very recent. This last summer saw a huge emphasis and awareness about social justice and specifically police brutality. We saw companied institutions, and corporations claiming to support these efforts and there was a huge uptick in donations and ways to donate to various social justice causes including the museum in the middle of this controversy. One of these was a fundraiser put on by See in Black to highlight Black artists and the Black experience through a variety of lenses. All the  prints were sold for $100 each and the proceeds were to go to nonprofits that support Black advancement toward equality. The fundraiser was held over two weeks and during the corse of the sale, the Whitney Museum of American Art (Whitney) in New York bought an undisclosed number of these prints without informing the artists. Two months later they scheduled a show of those images and put out an announcement via social media where they included the images and congratulated the artists for being chosen. The artist and See in Black were shocked and confused how the Whitney had obtained the images and how they were able to feature the works in a show without the artists consent. There are many issues with how the Whitney obtained these images most importantly was the fact that these works were sold at a discounted price as part of a fundraiser for which the artists themselves received no compensation coupled with the fact the sale was intended for person sales not institutional collections. To many this felt like blatant exploitation or just strait up stealing. After a huge backlash, the Whitney canceled the show and released a statement saying “We have heard the artists who have voiced their concerns. We apologize for how we handled the exhibition and the pain and frustration it caused,” The Whitney has been in a number of controversies about race and representation in the last couple of years and this controversy again illuminated the art world as a monolith in the US whose works are 97% white and male with only 1%  created by all women of color. Wether or not you agree with the statement of the intended show or the events of this summer, this was such a clear case of the continued misrepresentation, appropriation, and even erasure of BIPOC within the art world. While I believe that perhaps the Whitney’s intentions were from a good place,I feel like every step of the way, the Whitney really just fumbled the ball and missed the point.

Q: Every time I learn about Nazi looting or even just WWII I’m always amazed at just the sheer amount of evidence, documentation, videos, and photographs we have from that time. Does anyone else feel anything about that? And the other thing I thought while watching the movie this week was do you think that knowledge, as a part of art history, should be discussed in art history or art appreciation courses?