A Natural History Museum is a special kind of museum that displays a variety of exhibitions ranging a wide selection of topics, specializing, as the name implies, in the history of nature. These museums often display fossils and cadavers of specimens relating to the history of life on our planet. The natural history museum is probably one of my favorite kinds of museums. As a lover of nature and the documentaries surrounding it, it is a wonderful opportunity to examine an example of whatever creature I have become infatuated with recently. The scope of the title “Natural History museum” lends itself to an eclectic variety of exhibitions. Ranging from plant life, natural factors of the planet’s environment to the creatures that dwell on it and species that have been long extinct. I remember, as a kid, being a great lover of fiction, getting to visit the museum of the north in Fairbanks and being struck by the strange assemblages of bones, invoking fantasies of strange creatures and alien landscapes that were very real. The evidence was standing right in front of me.

As a history lover and major, talk of natural history museums always brings to mind one of my heroes and favorite presidents, Theodore Roosevelt. As a child, Roosevelt had a great fondness for the world around him and the creatures in it. This was so much so that he had decided to create a museum of natural history of his very own, in his parents’ home, much to their dismay. Hats filled with frogs and the corpses of various mammals being brought home by the small boy would be common occurrences. I recollect reading a story in one of his biographies. He had started to run some errands for his mother, only to find that the body of a seal had washed up on shore nearby. Roosevelt promptly shirked his duties to his mother in order to spend the entire day making measurements of the creature and poking it with various gauges of stick. He then returned home to beg his mother to allow him to retrieve the now extremely bloated corpse for his collection. The request was denied, and Roosevelt would denote his sheer misery in his journal. Later in his life, Roosevelt would contribute to natural history museums in other ways, namely, taking expeditions to exotic locales, financed by the Smithsonian, in order to kill and retrieve specimens himself. Roosevelt, of course, also instituted the National park service, which is now responsible for massive efforts to conserve the natural beauty of the United States. The organization also preserves massive numbers of natural specimens from the parks, which can be made available for study as well as loan to learning institutions across the country.

Do you have an individual you look up to that has contributed to the development of museums in a similar way? 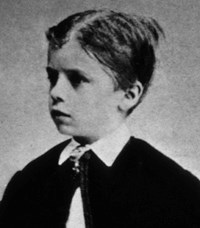 Above is a photo of Theodore Roosevelt at age 7, found at the National parks service’s website about him.