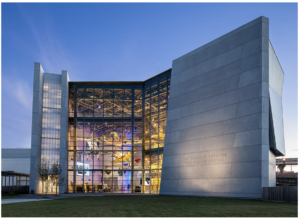 The museum focuses on the contribution made by the United States to Allied victory in World War II. Founded in 2000, it was later designated by the U.S. Congress as America’s official National WWII Museum in 2003. The museum is a Smithsonian Institution affiliated museum. The National WWII Museum is a private non-profit institution. They have received federal, state, and private funds for initial construction and the ongoing Road to Victory Expansion. This museum looks to be run by a board of trustees and two founders Stephen E. Ambose and Gordon H. Mueller and a group of executive officers. The museum puts out an annual report that goes over a lot of different things from distance learning, to where the museum is going, to their financials for each year. There is not much on the ethics policies of the information that they would control or some of the artifacts that they might have. They do list a private policy which lays out anything from disclosure of personal information to artifacts with the museum.

Their mission is to tell the story of the American experience in the war that changed the world and why it was fought, how it was won, and what it means today—so that all generations will understand the price of freedom and be inspired by what they learn.

The Museum offers a compelling blend of sweeping narrative and poignant personal detail, The National WWII Museum features immersive exhibits, multimedia experiences, and an expansive collection of artifacts and first-person oral histories, taking visitors inside the story of the war that changed the world. Beyond the galleries, the Museum’s online collections, virtual field trips, webinars, educational travel programs, and renowned International Conference on World War II offer patrons’ new ways to connect to history and honor the generation that sacrificed so much to secure our freedom.

This museum has a set vision statement and a list of core values that they go by. It does give you a sense of what they’re trying to accomplish.

In fulfillment of our designation by Congress as “America’s National WWII Museum,” we will:

COMMITMENT TO THE DEFENSE OF FREEDOM

Overall, this museum if you have never been to is one you should put on your list. The first time I ever went to this museum I was in awe not only of the amount of stuff that they had in the museums and the way the exhibitions were curated. But not only that I had a chance to listen to a survivor that was there that was donated his time for the week to just talk to people from that and explain some of the things that had gone on during this time. And afterwards the gentleman was so nice enough to take some personal time out and just talk to people one on one. This museum is one of the ones that I think is truly moving in a way that it touches you on a humanity level.

Question: Have you ever been truly moved by a museums exhibit? If So where and what was it?