On another topic of ethical or legal issues regarding collecting artifacts on federal land I offer a most recent question I experienced a few weeks ago in New Mexico.  I am a volunteer member with the Taos Archaeology Society which recently had a request for some obsidian nodules from the administrator of a collection of pottery sherds we are cataloging at the Southern Methodists University (SMU) at the Taos extension college.  SMU has 60 thousand sherds of pottery collected over 60 years at a site on their campus grounds at a long term dig named Pot Creek.  It seems the PI needed some obsidian nodules from a nearby source at a location by the name of No Agua (which surprisingly has lots of water that supplied the narrow gauge steam trains of the Denver & Rio Grande railroad nicknamed the Chili Line).  So being volunteers three of us agreed to drive to the site on BLM land to look for representative samples for obsidian hydration and XRF (X-Ray florescence) analysis to identify the source of lithics recovered at the Pot Creek pueblo.

While stumbling through the light snow at the 8,300 foot area recorded by the New Mexico Cultural Resources Inventory System (NMCRIS) files of the 20 acre area surveyed in 1978, we found suitable nodules to send to SMU main campus in Dallas, Texas. We did find a few golf ball sized nodules that blew out of a nearby volcano that later eroded out of the root mats of the scattered shrubbery that is called pinon trees.  Along with some finds my cohorts gathered one small broken triangular piece of shiny black volcanic glass that may have been reworked or tossed by ancient nappers. I also gathered a recent 30.06 Springfield rifle cartridge that appeared from probably recent hunters into the area open to elk hunters in the spring and fall.  Another find made by a geologist in the triad appeared to be an abrader of non-volcanic stone that was a palm sized crescentic shape about on a par with a rasher slice of an orange.  It showed obvious wear on the lunate surface that evidenced it was probably used to smooth a surface or abrade something into a tool.

I sent the possible lithic debitage along with the other nodules requested by SMU.  But one of hunter gathering seekers returned the apparent stone scraper tool to its site because it was not part of the requested objects.  So when I prepared the lithic gatherings to mail off I included the little triangular point for evaluation. I did not include the 30 caliber rifle shell but retained it for scale in the photo I also included in an email to SMU (and also assured the Post Office that I was not mailing anything that was liquid, hazardous or perishable, etc.

The question of the week is did we need to obtain permission from BLM in advance to gather the evidence for the SMU researcher?  And is collecting the spent rifle shell also required of the same permission in advance? 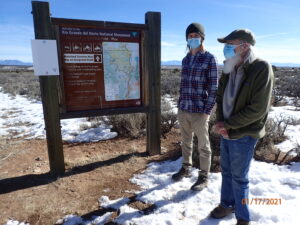 HINT: Read the sign at the entrance to the BLM area of the Rio Grande del Norte closely and the website  https://www.blm.gov/visit/rgdnnm

One Thought to “Ethical or legal dilemma for archeologists”