Alaska wolves of today are thought to be relatives of wolves that rode out last Ice Age south of the great ice sheets and then made their way back north. The recent discoveries of 2007 of extinct Alaskan wolf had a broader head and shorter nose than today’s version, and from wolves that died in the La Brea Tar Pits.  The Alaskan wolf had wider jaws too, making them better equipped too, making them better equipped to take large prey and scavenge. The wider jaw also made it easier to crack bones.
15 August 2007 Mystery wolf that disappeared about 12,000 years ago has just made another appearance. Researcher Blair’s Van Valkenburgh from UCLA her area of study has been the La Brea Tar Pits in downtown Los Angeles.
The Alaska wolves: DNA taken from the bones and skulls exposed by Fairbanks miners as they tore frozen soil away while gold dredging. The bones were collected from the 1920’s to the 1940’s and taken to the museum of natural history in New York. The wolves in Alaska today are not related to the Alaska wolves found in the permafrost. The Alaska wolves from 12,000 years ago are thought to have died off with the Woolly Mammoth and saber-toothed  cats at the end of the last ice age. 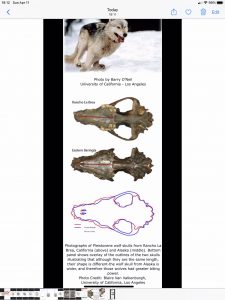 Beringia wolf does anyone know?