I viewed the recording of our Feb 11, 2021 meetup and always get a giggle out of the transcriptions.  I am aware that casual contemporaneous informational live talks like these are tough for the robot to transcribe on the fly, but some things are just too funny sometimes, sort of like bloopers. My three favorites were from Aaron Gunderson who the transcription had a tough time differentiating between Erin the student.  At  00:41:39 he was credited with the following; A research program (of) live crapping marmots and tracking them over years… followed by;  If you’re sampling volts and count the number of bowls you’ve seen… observing protocol described in our diet coke IAC committee.

I know these are not germane to an intelligent discussion but it’s just to let you know that I watch them, I have proof of viewing by pointing out goofy translations. Maybe if I turned off the captions i wouldn’t pay as much attention but like the late comedian George Carlin said of his craft, “I think of goofy crap”.  I couldn’t help but think of Aaron tracking marmot scat for years in the field, which he may actually do instead of trapping them as he actually said.  In that vein I had to laugh at the vision of him sampling bowls with volt meters too while drinking diet Coke at the IAC committee meetings.

However, goofy Gus aside’s to the contrary, I did like Erin’s intelligent questions of him concerning her experience with researchers tagging and bagging marine mammals and the procedures involved in getting them into a museum. Aaron’s in depth reply was very informative in illuminating the multiverse of bureaucratic paperwork in getting dead animals and killing live ones.  When Aaron remarked about his guidelines of taking no more than 20% of animals observed, this brought to mind the reading we had by Robert Loftin on Scientific Sampling, the ornithologist who deals with the dichotomy of philosophies for animal liberation versus the land ethic.   The last section of that reading at pages 263 & 264 was useful with eight very cogent criteria for gauging the need to killing animals for species sampling.  I have been attending the Zoom sessions by the Taos Land Trust Audubon Society for observing and recording bird counts at a wetlands area.  The speaker is a professional birder who guides novices on how to properly record what they see in the flighty world of logging species

There is a big difference between getting useful data from simple observations to actually bagging birds by shotgun for collections.  But nonetheless either method highlight’s the pitfalls of poor recording and misidentification that even professionals can mistake in birds like differentiating rare woodpeckers.  Case in point is the subtle differences between hairy and downy woodpeckers.  About the only way beside shooting them and laying out their corpses side by side, is to carefully compare the length of their peckers with their heads.

Also without killing them you have to be well trained for the difference, which is the crux of being a good observer both professional and amateur.

Finally, the notions of Who Owns Native Culture reading by Michael Brown reminded me of two events that came about when I was researching a lead about another rock art site far removed from the Moose Creek pictographs when I did my MA at UAF.  The research I was doing after it was noted in an Alaska Magazine article had a letter to the editor from a ADF&G fish counter on the Chilkat River.  This fellow had a sketch of some pictographs that had similarities to one at the Moose Creek site near North Pole outside Fairbanks.  He also had some photos taken as noted in the field book along with the fish counts. I contacted him via emails, phone and letter because he remarked originally that he would share them but never heard from him for several years. Much later I found out the site was apparently on SEALASKA land which is the Native corporation formed for land claims resulting from the ANILCA settlement.  https://www.nps.gov/locations/alaska/anilca.htm

I contacted the cultural resource person to ask if they had any information regarding the site but was apologetically told that photos or other data they had on the site was not open to researchers.  I understood that these items were culturally proprietary but at the same time felt like I was being lumped in with pothunters and graffiti artists.  Of course I understood because to her I could have been anyone even though I had a pedigree in rock art studies and wanted to get more information to see how far these similar symbols were distributed in Alaska.  I roughly knew where the site was because I had access to the SHPO database of all the recorded rock art sites in Alaska.  What I thought about doing was going down to Chilkat and hiring an angler with a boat to locate the site on my own because I found out later that it was actually on State land not SEALASKA.  But being so far from Fairbanks and having little knowledge of the area and no professional contacts it is on my bucket list for rock are sites to visit.

On a parallel path I had a slightly better experience locating another artifact collection that had photographs of a set of similar imagery to the Moose Creek pictographs.  This lead was an image from a book by Julie Cruikshank “Life Lived Like a Story” of a prayer stick that also was a dead ringer with one of Giddings sketches.  I contacted the curator (EXTRA CREDIT FOR SAYING THE SECRET WORD LIKE THE RUBBER DUCK THAT DROPPED ONTO THE  STAGE WHEN A CONTESTANT IN THE TV GAME SHOW YOU BET YOUR LIFE FROM THE 1950’S SAID IT TO THE HOST GROUCHO MARX DURING INTERVIEWS) at the Mc Bride museum in Whitehorse, YT about the provenance (MORE CREDIT FOR USING ONE OF THE WORDS IN OUR VOCAB QUIZ).  However she had not much about where it came from or whom because it was in an old collection with very little documentation.  But at least I got info on it being generally from an Athabaskan area near Whitehorse in Canada.  So this gave me a hit for finding a match from an indigenous culture in the Yukon Territory 500 miles south of Moose Creek near Fairbank’s.  Since this search was done over 30 years ago doing my masters work, it is uncertain if this artifact would be eligible for repatriation under Canada’s regulations especially if the source is unknown because of scanty documentation?

SO THIS BRINGS UP A QUESTION TO OUR PRESENTERS, JOSH and ANGELA;  We have read a bit about other countries like Australia and England along with other nations concerning their policies of museum display, handling and cultural or intellectual academic theft.  BUT WHAT ABOUT OUR NEIGHBORS IN CANADA? 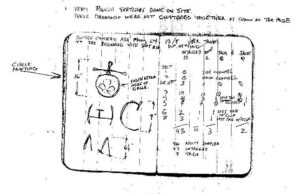 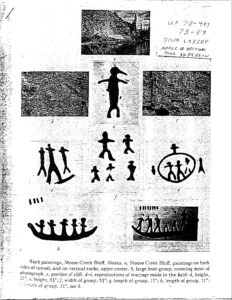 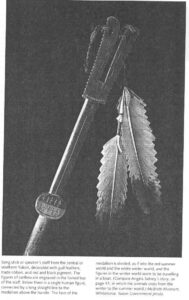 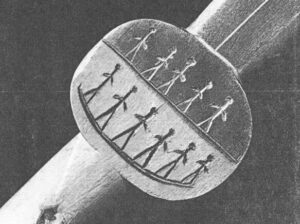