Name some complications of having living collections.

Living collections are a great way to intrigue people of all ages and allow them to learn about the world around them through real-life experiences. This is infinitely valuable to the community being able to experience things that many simply do not get the chance to see in the wild and would otherwise never know the details of the subject observed. However, living collections are far more expensive to maintain, whether it be feeding fish at an aquarium or hosting a reenactment of a civil war battle, these things will not be cheap, and neither will the insurance. This, however, is often offset by the sheer amount of benefit gained by observing a live demonstration or any other kind of living collection.

In a Botanical garden, one must supply a considerable amount of soil water and sometimes unique lights for certain plant kinds. Other kinds of living collections containing animals will require feeding, ranging between certain kinds of plants or meat. Living animals also require medical upkeep and specialized habitats for each kind of creature, and both can become reasonably expensive rather quickly. What more, these kinds of attractions have too often been heavily insured. As unlikely as it may be, it is possible that an animal could escape and injure a person. An example of this can be seen in the viral Netflix series Tiger King. Though the attraction run by Mr. Exotic and featured in the show may not be an especially credible, ethical, or well-run facility, it remains an incredible example of how people working with animals can be endangered.

As far as reenactments go, the cost of each varies upon the period. Periods that require less pyrotechnic work will, of course, be less expensive. A recreation of a hunter-gatherer settlement could be far less expensive than an attraction like the O.K. Corral, which requires large amounts of blank ammunition for the theatrical firearms. I can only imagine how much it must cost to hire and supply a real blacksmith for a living exhibit. The upkeep on the buildings must be rather expensive as well.

One of my favorite books I have read in the past few years is Confederates in the Attic by Tony Horwitz. Horwitz travels across the American south interviewing civil war reenactors that try and describe why they prefer the side of the confederacy. This book is excellent for several reasons. It sheds a tremendous amount of light on the appeal of these civil war reenactments and the cost. Many of the men involved in these reenactments spend a massive amount of money and time configuring the buttons on their coat or ensuring their replica rifle has accurate scoring on its steel parts. These reenactors also become rather snobby about those who participate. Anyone who is not as informed as the next fellow is marked as a “Farb,” causing feuds and stress within reenacting communities. This kind of cattiness must cost something, more than likely one’s sanity. 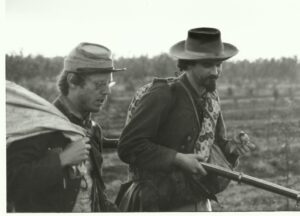 Pictured: Tony Horwitz(left) and Robert Hodge participating in a reenactment.

One Thought to “Living Collections”