Since I have a conflict with our Thursday meet ups with and archaeology webinar in Colorado, I have to watch the recording a day later.  So during the input from instructors and students, i got some great topics to comment on which I couldn’t chime in yesterday.  And since I do my best talking after the fact, I thought I’d share some experiences I’ve had with UANM collections and another small museum that just got formed near Fairbanks.

First has to do with the only surviving artifact that was the subject of my anthro grad project at UAF.  In our first intro session Josh provided an image from UAMN’s collection of the pictograph site at Moose Creek 20 miles south of Fairbanks in Salcha on the Richardson Hwy to Eielson AFB.  I have reattached that PDF along with my own crude Polaroid photo I took of these remnants when I first saw them. December 2016 Moose Creek Pictographs

Besides using my lunch cup-o-noodles to support the rock chunks and provide scale, I first studied the only remnants in 1991 for my MA on the Moose Creek pictographs that were housed at UAF from that 1940 destruction by the Army Corps of Engineers to make rip rap to protect the WW 2 airbase from the Tanana river.  At that time dating pictographs had just started using Carbon 14 samples if there was either an organic binder in the paint or other organic carbon in the pigment.  I approached the UANM archaeology manager whose position Josh now holds of the artifact to discuss getting a sample off the remnants for carbon dating.  However pictographs needed several grams of a sample to do that.  He indicated that the only small chunks of rock assembled together were rarer than hens teeth and it was improbable there was enough to scrape off less than a gram in total.  After attending a rock art conference in 2017 I had a discussion with a researcher who presented a paper on the latest dating techniques available.  It is now possible to get samples in the milligram range for dating this way. However even getting such a small sample off the Moose Creek pictographs would probably involve completely scraping of all the pigment.  This highlights the topic of destructive or representative sampling for research on rare artifacts. Also a major unknown in dating these remnants is the glue that was used to hold these shattered pieces together after being collected in 1940.  It has not been studied nor is it known when and how these were glued together into their present configuration.  If it consists of some organic compound then getting an adequate sample in the future could be futile even in microscopic amounts. Perhaps if UANM has a portable XRF it might yield some answers. But it is dubious they have forked out the $45K to get one presently with the last several years of budgets.

Second: Small local museums perked up my ears when it came to the topic of how unique and valuable they are.  There are a number of these examples in Fairbanks, not just including the five that I am familiar with at Pioneer Park that sit within spitting distance of the Tanana Valley Railroad museum at which I was director for six years. These little enclaves of local history are the jewels in the crown settings that in my mind eclipse the mongo ones with far more brilliance for relevance to sense of place that involve a cadre of stake holders.  A good example of the most recently formed little local pocket museum is the Salcha History Society display on the second floor of the Salcha Senior Center.  This museum was founded by a fellow member on the Fairbanks North Star Borough Historic Preservation Commission who is a retired Salcha  elementary school teacher several years ago who wanted to document and collect not only artifacts but oral histories of seniors who visit there.  She has not started the process of getting non-profit status and has no budget except the free rent of the upstairs senior center log building that was donated because for some reason it was stupid to have a second floor with no handicap access for meeting rooms.  You can touch and feel and fondle all the artifacts that were donated by the early settlers in Salcha.  One particular senior who helped with the native Athabascan artifacts is the only surviving member of the Salcha band whose now deceased mother and older sister were the last native speakers of the dialect.  Although the white settlement history of Salcha revolves around early homesteaders who got parcels from the BLM during and after WW 2 when Eielson AFB became a major airbase when it was further built-up during the cold war, it was a historical village both native and white during the road house era in the early 1900’s when Fairbanks became the gold rush capital in the interior and the only way besides steamboats when the rivers were not froze to the lower 48 was via the Richardson trail to the Valdez port to sail to Seattle in the winter.  It took nearly two weeks in a horse drawn open sledge the 375 miles to Valdez via the roadhouses spaced about every 20 miles to provide lodging and Salcha roadhouse was one of the last stops to return to Fairbanks. Salcha was also one of the stops for the first military expeditions into interior Alaska by Lt Allen of the army in 1873 and later by Lt Castner in 1898.  This history is featured in little snippets of the clutter of displays there. 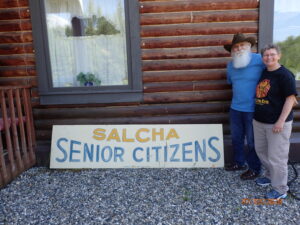 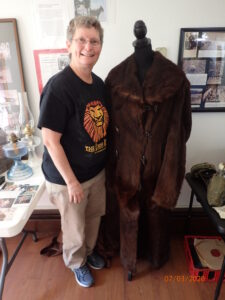 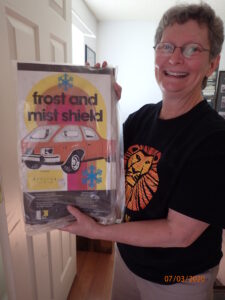 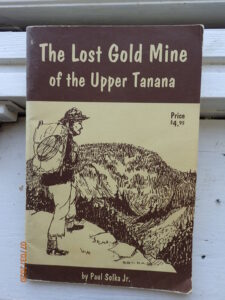