Although I’m not looking for a job at a museum since I got involved with the Tanana Valley Railroad museum in Fairbanks at retirement  (which I will belabor on most every post) I have been a VP, collections manager, public education outreach, operations, display, curator, technician and preparator all in one.  It was fun, educational and varied to meet other museum folks from all over the world who of course only spoke English or like the Japanese tour groups who arrived with masks long before COVID, had a translator for my spiels. A train museum is a small audience that traditionally revolves around this topic as an old white-guy-atarium, especially with railroads in Alaska.  Surprisingly enough there don’t appear to have been early railroads in Alaska to have African Americans in the coaches nor Native Alaskans.  However we tried to be more inclusive by hosting Rail Tales for several years to draw interest in the winter off season (we only operated from Memorial Day to Labor Day).  Some of the presentations did have Alaska Native speakers from firemen and brakemen who ran on the ARR trains after WW II or woodcutters who provided the fuel before coal was available in the latter 1920’s. The US Army Quarter Master Corps took over operations of the ARR in WW 2 since it was still owned, operated and built by the federal government because Alaska was not a state but a territory. Also the sternwheel steamships out of the port of Nenana were also owned by the ARR to supplement the rail service to villages along the Tanana and Yukon river drainages.  During that era Native woodcutters were employed all along the village river route to cut firewood for the steamships rather than coal or oil because it was a ready supply of fuel.  Each fueling stop was abut every 20 miles because the boilers consumed about 20 cords of wood between stops.  The boilers were newer designs which had condensers to recycle some water along with being able to burn green wood because they ran so hot.

One interesting feature of the track gangs included local Athabascans who did the maintenance on the ARR lines.  Also of interest is that a number of Native workers were called Siwash Indians generically tagged as from the Pacific NW and Canada not considered a specific tribe but a more general derogatory term for Native Americans from that area.  it was derived from the French Canadian word for SAVAGE.  So local Athabascan workers got tagged as such.  When I lived in Cantwell these locals were referred not as Athabascan but Siwash as if they were imported as rail workers like Chinese laborers for railroad construction gangs that were maligned during the westward expansion in the mid 1800’s

Alaska railroads were not part of the earlier expansion but started in the 1900’s. An early speech given by Judge Wickersham on July 17, 1905 at the golden spike ceremony for the Tanana Valley Railroad connection at Fairbanks had an actor posing as a Wickersham impersonator at a Golden Days100 birthday celebration of the judge. In it he applauded the railroad not being built by the inferior yellow eastern race as had been done in the west.  I don’t know if any Chinese Americans were in the audience.  As a controversial topic this was not well received by the Fairbanks chamber of commerce who put on golden Days to celebrate the founding of the town in 1901. This knowledge of past inglorious attitudes of pioneer founders of this gold rush town is not easy to hear today.  But this is sometimes a painful awkward job of what museums have to document early  history in current times. 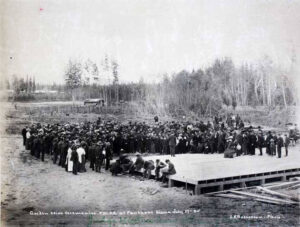