Not being able to log onto Thursday’s meet ups live, I must be content to watch the recording the next day.  So my comments are not live in the chatterbox but I really enjoy the audio tracks that appear as a side bar.  I don’t know if these subtitles are shown on the live feeds, but I love the way the computer tries to interpret the speakers phrases and run on sentence structure.  I really liked Angie’s background of the Star Trek set and Erin’s monocle wearing day-glo double head caribou art too.  I expected Josh and Stef to appear in back of Angie by entering through the side doors in the background of the Enterprise bridge instead of being talking heads with blue tinted glasses resulting from the reflection off their computer screens and seeing up their noses.

I was almost distracted by the disparities of what the robot (semi-Siri-ish) computer interpreted for some of the technical terms bandied by the speakers and Stef’s slight German accent, but managed to still get the thrust of things even though I had to quickly laugh at some.  I will chime in retroactively for what I have experienced with museum employees.  The subject of how to get into the museum field either professionally or voluntarily is something I don’t really see for my career path because I am almost one of Pat’s or Josh’s late Pleistocene living  fossils.   But one thing I might suggest is to consider getting involved with a local historical society.  Angie can tell you of her experience as chair of the Fairbanks North Star Borough Historic Preservation Commission (HPC) that I am still on. Although HPC members are usually retirees or professionals in the field, it is one way to draw into a diverse crowd of likeminded locals who have an interest in preserving history within their municipal areas.  The topics that an HPC deals with include reviewing and commenting on subject areas within their regulatory jurisdiction for diverse projects ranging from Section 106 permits (which should be covered in later modules), historic districts or dwellings, SHPO designations, cultural resource studies (like military bases in Fairbanks and archaeological projects to mitigate pending development of these areas). I recall a few UAF history students attending some of our HPC meetings to look at how we operate, what we talk about and what a typical agenda deals with.  If you want to view these topics one way is to log into a typical agenda or minutes to get a grasp.

One of the most interesting items was a study of historic buildings in North Pole that would be affected by the expansion of Eielson AFB and the impact of over 3,000 people moving into that area to serve the operations of over three dozen new F-35 fighter jets.  Another was the updated survey of historic buildings inventoried and updated since last done in 1979 & 1982.  This involves several public hearings to take public input that involves CRM professional contracts using taxpayer money.  Attending these meetings can be very illuminating and sometimes scary when very interested and informed citizens contrast with conspiracy wingnuts who fear that the jets and drones from the military will spy or surveil them at home. Also historic preservation can mean to many that their property may be highly restricted from use or development because of the designation infringing on their constitutional private property rights.  Likewise museum staff must tread politely but forthrightly on folks who view their collections as antithetical to their beliefs.  Sometimes being blunt or honest about opposing views is very difficult for a professional who is steeped in current scientific doctrine after a life of study and work in a certain field.  If you want to see someone who is very upfront with their belief in scientific principles who takes on religious dogma at the Noah’s Arc museum take a look at one ballsy guy, Bill Nye the science guy.  But I don’t think UAMN staff dare do this on TV:

As part of any HPC work you get to interface with museum personnel, other government agencies like DOT, DNR, municipalities, the military and CRM contractors who work on projects.  The broad brush but limited scope of these projects can lead you into one of the worst time consuming voluntary activities that college students have little spare time for wile satisfying course requirements.  One thing I always warn students about historical searches, which may involve lots of museum research along with tons of library hours, is that it is like being sucked into a black hole where you never know where you will end up.  When innocent eager students undertake studying one historical event it is similar to just orbing outside the event horizon but if you start to go in deeper you will not be able to escape the gravity and slowly spiral in to never be seen again because even light cannot escape.  BEWARE OF HISTORICAL & Museum studies because it’s a never ending spiral of connectivity without end.  And as museums are now illustrating we are all connected with many degrees of separation but still in some synchronous orbit. 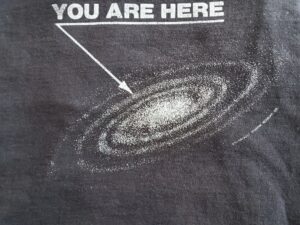 One thing I’d like to see in these Zoom met ups would be some presentations by UAMN’s minions to describe their work.  I would love to hear from whoever makes the displays.  I only have known retiree Steve Boutet who built a lot of displays in the old museum before it was expanded in 2006 with the pair arching white whales addition that is supposed to look like the dancing aurora from the bottom of the hill.  Perhaps we could hear from a person who now does that?

One Thought to “Museum jobs on Thursday meet up”