Skip to content
How to Join
This topic was recently discussed at our Tanana Yukon Historical Society board meeting on March 4th, 2021 about a bowhead whale skeleton at UAMN.  I don’t know if this has been one of our class module topics or meet ups, but thought it may be of interest to the students.
Aren Gunderson sprays water while others scrub a bowhead whale skull with dish soap outside the UA Museum of the North in summer of 2020. UAF photos by JR Ancheta unless otherwise noted.
https://spark.adobe.com/page/AB8jvWG16qviy/?fbclid=IwAR1xF8vcXqC-rWH-MfvDYaMAWWAB0ZS3eH-wvyicOoJvWIPNkNFVcCy3xbU
Over the years during our “Friends of the UA Museum” meetings, Bill Stroecker would frequently comment about an old (obviously gone by the time he was commenting) whale carcass in the Wien Hangar which should have been cleaned up and displayed in the Museum.  He similarly commented to others in town, several of whom later served on his subsequent Stroecker Foundation board; we on the Friends and his Foundation kept the idea alive as tribute to his dream for the Museum.
Fortunately several of the Museum curators identified a suitable bowhead (largely in tact) already in the collection which might be suitable, particularly for display in the atrium space so visitors could have seen it from many angles.  It’s taken many years for the Stroecker Board to agree to fund the project (about $1m) which involved structural reinforcement of the atrium, ton$ of UAF authorization$, as well as prepping the skeleton.  This specimen had evidence of an embedded harpoon which then allowed interpretation of how Inupiat hunters deal with bowheads.  Museums Friends are funding a “Whale” exhibit in the recently enlarged special exhibit gallery to accompany the soft opening this spring.  Covid restrictions will dictate how things roll out.
Aren is the guy doing most of the physical preparation with student assistants although everything (exhibit interpretation and design, etc.) goes through a complex Museum committee structure.
We’re so pleased to have this exhibit completed and rolled out during this rather depressing, covid period.  We hope it will be a community celebration which reaches into the entire UA System. One of the Friends major efforts has been to get the Museum designated as a state repository for research materials collected on state lands, and thereby to acquire authority to collect state/federal funds for the collection and maintenance of the 2 million specimens. 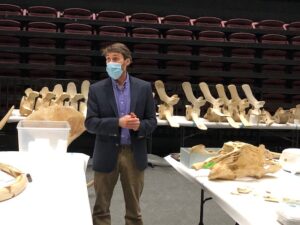 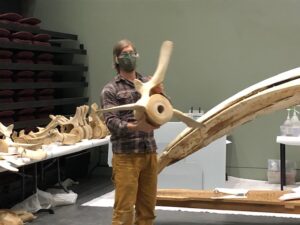 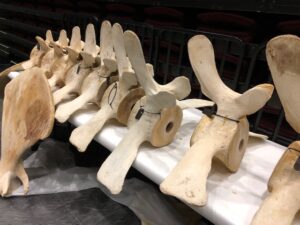 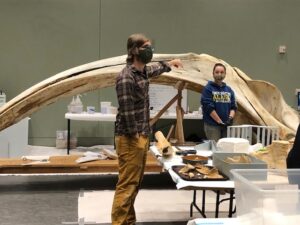 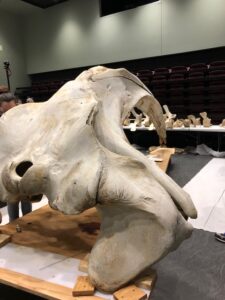 Moments after cautiously removing the cover from a foul tank of lukewarm liquid, Aren Gunderson ’07 peered inside and crinkled his eyes.

The coffee-colored stew immediately delivered the sour-sweet smell of decomposition, thanks in part to a bag of rotten whale flesh hidden somewhere beneath the murky surface. A light, oily scum had formed on top.

Gunderson, the mammal collection manager at the University of Alaska Museum of the North, was smiling.

“This is the best part of my job,” he said, grinning behind a mask. “I can’t believe it’s happening.”

Even by the strange standards of 2020, this was quite a summer for Gunderson. He spent the long Alaska days working in a smelly, windowless laboratory at the University of Alaska Fairbanks’ Arctic Health Research Building, surrounded by freezers, vats of mysterious potions and an inescapable funk.

But to illustrate his enthusiasm, Gunderson reached into the liquid and pulled out a prize — a 6-foot bone marked “right rib #6.” It’s just one piece of a bowhead whale skeleton that was donated to the museum soon after the creature was harvested by a Barrow whaling crew in 1963.

Bone by bone, the skeleton is being revived to museum-quality condition after a half-century out of public view. Gunderson is leading that effort.

One Thought to “Picking, packing and displaying whale bones”